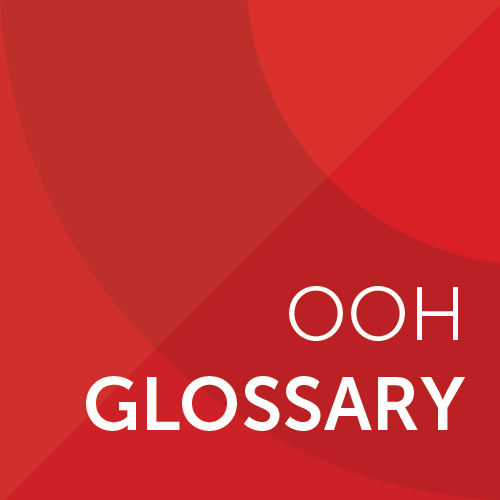 The number of units required to achieve a desired GRP level in a market.

The recalled recognition of an OOH advertising message by an individual or audience. Ad awareness is influenced by creative copy and the consumer’s relationship with the product or category.

Display area which extends beyond the live copy area, often to the edge of the finished size.

The largest standardized OOH format; typically measuring 14’ x 48’ in overall size. Sold either as permanent displays or in rotary packages.

The interval of time when an OOH advertising campaign is run.

A specified period of time when a contract can be terminated.

Defined by the United States Office of Management and Budget, a metropolitan area within a larger markets (e.g. DMA) containing a substantial population nucleus, together with adjacent communities having a high degree of economic and social integration with that core. CBSA’s are a standard geography for buying and selling media.

A measurement of traffic volume in a market. Circulation only estimates the number of people with an opportunity to see an out of home display and, therefore, is no longer a credible measure of an OOH audience and is out of step with other media metrics.

Audience estimates of people exposed to actual advertising. TAB OOH Ratings are the first media measurement system providing true commercial audiences of OOH advertising rather than audiences that are merely exposed to editorial content (e.g. read a magazine, read a newspaper or tuned to a TV program, etc.)

The elimination of gaps in a media schedule by maximizing the duration of a campaign, ideally 52 weeks.

The sharing of advertising costs between a manufacturer and distributor or dealer.

The viewing area on an OOH unit.

1. Based on the defined geographic parameters of a market, expressed as DMAs, CBSAs, groups of counties, or individual counties, also known as coverage area. 2. Coverage can also be the percent of the population within any of these geographic areas that can be reached by the total inventory of a media operator.

The cost of delivering 1,000 impressions from individuals who notice the advertising on displays in a market.

The cost of advertising exposure opportunities that equals one rating point in any geographically defined market.

A section of road with a specific traffic pattern. Count stations contain traffic estimates and the demographic composition of that traffic.

An advertising display which is visible across traffic lanes on the opposite side of the roadway.

The historical OOH audience measurement system. DECs are the average number of persons, in cars or other vehicles, passing and potentially exposed to an advertising display.

Any OOH display that can change its advertising content using addressable screen technology.

The strategic placement of OOH units across a market. The distribution of units will impact the reach of the campaign and the demographic profile of the audience that is delivered.

A television market area defined by Nielsen Media Research that is also used by advertisers for multi-media planning. DMAs are non-overlapping and cover the entire United States.

The interval of time when a consumer is in close proximity to an OOH ad.

The number of persons within the target audience exposed to the advertising schedule an average of three or more times.

Letters, figures, mechanical devices or lighting that is attached to the face of an OOH unit to create a special effect.

As derived from TAB’s visibility research, a physiological or behavioral measure of actual eye contact with an OOH media unit and its advertising. TAB OOH Ratings are derived from the adjustment of circulation or passing to those who notice the advertising.

An area of copy made as a cut out that falls outside the basic restraints of a bulletin or poster.

The surface area on an OOH unit where advertising copy is displayed. A structure may have more than one face.

The cardinal direction that an OOH unit faces. As an example, a north facing bulletin is viewed by vehicles traveling south.

The method used to hem the edges of posters and bulletins. Finishing can include welded pockets or other operational techniques for hanging substrates onto billboard units.

The length of an advertising campaign, sometimes divided into distinct segments over the course of weeks.

The average number of times an individual notices an OOH advertising message during a defined period of time. Frequency in OOH advertising is typically measured over a four week period, but can be reported for any campaign length.

The Geopath ratings system was designed to provide OOH advertising with credible metrics comparable other measured media. This is achieved with a sophisticated research program specifically designed to measure audiences who actually see advertising on OOH ads throughout the country. The integrated research method implemented incorporates research and expertise in the areas of circulation, visibility and eye tracking research, demography and trip modeling, and the building of powerful reach and frequency models.Gross Rating Points (GRPs)

Out of home media that are used to create customized advertising programs that generally target specific consumer audiences. Lifestyle/Retail includes, but is not limited to: arena and stadiums, placed based, digital networks, health clubs/restaurants/bars, exterior placed based (i.e. airborne, marine, resorts and leisure).

The portion of the OTS (Opportunity to See) audience who are likely to see an ad. OOH is the first medium in the US to move from reporting OTS audiences (DECs) to LTS (Likely to See) audiences, which can also be referred to as commercial audiences.

The simultaneous viewing of more than one OOH unit.

A listing of all locations and displays included in a specific OOH program.

The physical inspection of the units that comprise an out of home program in a market – either pre-buy or post-buy.

The interval of time when a digital OOH advertising message is viewed.

A truck equipped with one or more poster panel units. The truck can either be parked at specified venues or driven around designated localities.

A sign that advertises products or services that are not sold, produced, manufactured or furnished on the property where the sign is located. An OOH display is an off-premise sign.

A sign that advertises products or services that are sold, produced, manufactured or furnished on the property where the sign is located.

Out of Home technology refers to the application of innovative techniques, methods, and processes used to develop and advance the product offerings of the out of home advertising industry.

A basic measure of media exposure. OTS estimates are measures of media exposure (e.g. magazine readership or the TV program exposures) and not the advertising. OTS is today’s standard for reporting ratings for all media types except OOH.

Out of Home Media (OOH)

All media formats specifically intended to reach consumers outside the home.

The percent of the total audience for a display or schedule that a brand target demographic group comprise.

A term used to identify a media company and its entire OOH advertising inventory in a market.

Polyethylene is a widely used plastic thermoplastic polymer consisting of long chains of monomer ethylene. It is used to make single sheet posters or other billboard substrates and is recyclable.

Polypropylene is a widely used thermoplastic polymer with an intermediate level of crystallinity between that of low-density and high-density polyethylene. It is used to make single sheet posters or other billboard substrates and is recyclable.

Polyvinyl Chloride is a thermoplastic polymer constructed of repeating vinyl groups or ethenyls having one of their hydrogens replaced with a chloride group. The vinyl is commonly used as an advertising substrate for bulletins and some poster products.

The date when a poster program is scheduled to commence. A five day leeway is customary.

Detailed directions provided to an OOH company by an advertiser or agency assigning specific copy to specific locations.

Certification by an OOH company that contracted advertising services has been rendered.

The approximate percentage of a target audience’s population who notice an advertising message at least once during an OOH campaign.

An adhesive strip that is used to cover a portion of copy displayed on an OOH unit.

A bulletin that is usually larger than 14’ x 48’ and is positioned at a prime location in a market. A spectacular often utilizes special embellishments.

Advertising displays, many that provide a public amenity, positioned at close proximity to pedestrians for eye-level viewing or at a curbside to impact vehicular traffic. Street furniture displays include, but are not limited to: transit shelters, newsstands/news racks, kiosks, shopping mall panels, convenience store panels and in-store signage.T

A wide variety of material used to produce OOH displays. Billboard substrates are typically made from thermoplastic polymers or PVC. Many street furniture and transit substrates are made from Fasson, paper, or film, among other materials.

Any audience reflecting the most desired consumer prospects for a product or service, defined by age, sex, race, ethnicity or income; or their combinations for any geographic definition.

The total number of in-market impressions from a target audience delivered by an OOH campaign expressed as a percentage of a market population.

The recording of the vehicles and pedestrians passing a given point; used by TAB to authenticate the circulation that passes outdoor advertising structures.

Displays affixed to moving public transportation vehicles or in the common areas of transit terminals and stations. Transit displays include, but are not limited to: bus panels, train/rail panels, airport panels, taxi panels and mobile advertising signage.

The dimensions of an advertisement substrate once it has been prepared for placement onto an OOH unit.

An OOH unit with a slatted face that allows three different copy messages to revolve at intermittent intervals.

Ultra-violet cured coatings are applied over inks printed onto advertising substrates and dried by exposure to UV radiation. UV coatings are used to prevent color fading on advertisements from sun exposure or other ambient lighting sources.

Murals painted or attached directly onto the exterior surface of a building.