When we left New York City — on September 12, 2001 — we could see smoke in lower Manhattan from our southbound AmTrak window.  No one spoke.

The out of home industry had gathered in Midtown Manhattan for its convention, on September 11, 2001 (at Marriott Marquis on Broadway).

Huddled around a laptop at the Marriott Marquis, your peers at that time in the industry created, approved, and implemented a national unity campaign. There was no committee, no bureaucracy, no study commission . . . just consensus and action.

Meanwhile, a new (separate) campaign was revised to feature 9/11 images. The Pass It On campaign, sponsored by the Denver-based Foundation for a Better Life, launched with these images. To this day, the poignant image of the child with the American flag at a unity rally makes my eyes moist: 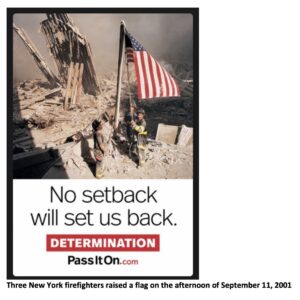 Over the past 20 years the Pass It On messages have been seen over 100 billion times on highways, in airports and on Times Square spectaculars.