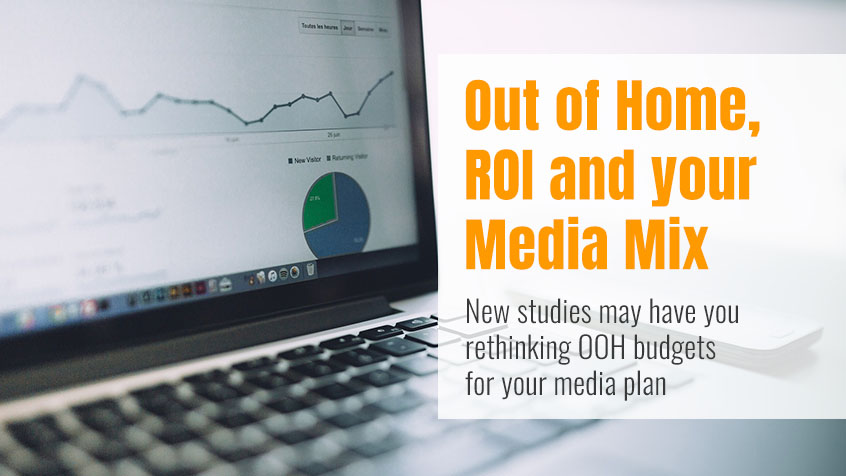 Home / Blog / Realizing the Full Potential of Out Of Home Media /

Realizing the Full Potential of Out Of Home Media

What would you do if we were to tell you that in order to make your advertising campaign work to its fullest extent, you should not only triple your Out of Home budget, but take dollars away from television and radio to do so? Now before you close this article out and laugh about it with your colleagues, results from recent studies from Nielsen and Omnicom’s Benchmarketing show that billboards and bus shelters and the rest of the OOH media world should be playing a much larger role in your brand’s media spends.

A major hurdle for the out of home industry has always been the ability to measure an ad campaign’s success. That isn’t to say that efforts were not made. But daily counts of traffic driving by a location were never enough to put OOH on the same playing field with other media when it came to ROI, and justifying budgets.

Thanks to separate, independent studies recently released from Nielsen and Omnicom’s Benchmarketing, there is now ground to stand on. Both demonstrate the media’s ability to produce success for advertisers. These reports also show that shifting budget dollars, even by a percentage point or two, can dramatically increase the effectiveness of the campaign.

Out of Home over-performs its budget for driving online activation:

When it comes to motivating consumers to generate activity online either with search engines or sharing on social media, it should come as no surprise that television is tops compared to radio, print and out of home. However, the leader in delivering the most online activity per ad dollar spent might not be your first guess.

According to Nielsen’s OOH Online Activation Survey published earlier this year, out of home media indexes nearly four times the amount that should be expected given it’s relative (and small) percentage of budget. On average OOH media makes up around 7% of a media budget, but it generates 26% activation share for search engine engagement alone. When it comes to engagement on Facebook, Twitter and Instagram, these rates are even higher.

Given this information we can see that shifting budgets towards out of home media, even by just a percentage point or two, can provide huge returns. But how much money should you shift? Benchmarketing took an in-depth look into figuring out OOH’s sweet spots within an ad budget.

Diminishing Returns and Out of Home’s Ceiling:

Out of Home ROI and Optimization in the Media Mix, the report published earlier this year by Benchmarketing (an Omnicom company), sheds a different light on the situation: OOH is more effective in generating Revenue ROI in comparison to other media formats, despite having the smallest portion of budgets. Furthermore, when OOH is stacked up against television, the two are about even in driving Revenue ROI.

First the study took a close look at the average budget allotments and ROI per media type. This provided the stepping stones in determining better ways to divide advertising dollars. Television and radio both experience high diminishing returns. For example, the difference sales revenue generated from spending $40 million and $60 million is negligible compared to the increase in revenue from $20 million to $40 million spent.  Digital Display and Newspaper/Print do not show as dramatic a drop off, but the curve is beginning to flatten out.

OOH on the other hand shows no signs of leveling off. With that said, if sales revenue is the main objective, money should be taken from radio and television and allocated towards Out of Home. This again echoes statements that can be pulled from the Nielsen report: OOH excels in generating ROI and more money should be given towards it to let it continue to produce.

Reallocating Out of Home within the media mix:

Benchmarketing examined four major industry categories across three budget levels and five purchase funnel segments to determine a recommended share of spend for OOH versus the media’s current share of spend. There are recommendations to increase Out of Home budgets in almost every situation. Most instances saw a doubling or tripling of spend with the largest increasing the OOH budget sevenfold.

Overall, the results can be summarized into four main takeaways:

Across the board, the findings scream “spend more” on out of home media. Drilling further down reveals the areas that can see the greatest effects from these suggested increases. For example, in the automotive sector it is recommended that all budget levels devote larger portions towards OOH. Doing so will help improve brands across all five stages within the consumer purchase funnel. But for lower sized budgets specifically, increases up to 14% (from 2%) will help to increase brand awareness the most.

A new golden age for Out of Home media:

So what does all of this mean? The obvious answer is that more money should be allocated to out of home media. If money needs to be taken from other areas, start with television and radio. More importantly, OOH is entering a time that could very well be another golden age for the industry.

Globally, we have already seen an increase in spend by $10 billion within the last ten years (Statista 2017). With new advances in technology we are now able to provide solid data and rationale, an aspect that has been lacking and long desired. Reporting and campaign measurements can be viewed on an equal playing field with the other media types. This positions OOH to no longer be seen as an afterthought, but a pivotal cog in any brand’s marketing engine.