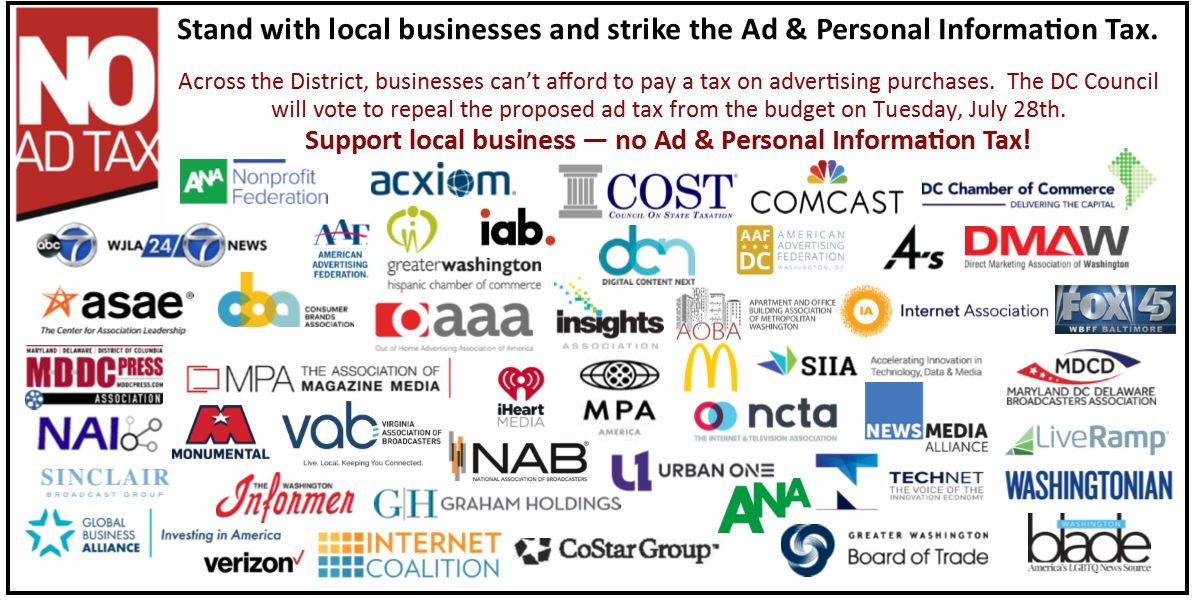 Q&A: What Happened to the Ad Tax in DC?

On July 7, the chairman of the DC Council (Phil Mendelson) proposed tax increases to help balance the city’s next budget, starting October 1. This budget included a new 3 percent tax on advertising and personal data use that would generate $18 million+ in the first year.
The city is hungry for new revenue to fund services (affordable housing, mental health, help for immigrants, and more), while other revenue declines due to the pandemic’s grip on the economy.

Why did the city drop the tax?

Opposition to the ad tax was deep and widespread. Community media — with strong connections to elected officials — were influential in this fight (The Washington Informer, African-American, The Blade, WHUR radio, City Paper, and The Georgetowner).

OAAA was an active participant in the broad coalition to drop the ad tax.

Grassroots lobbying was high-volume and effective. On July 23, when the DC Council voted 11-2 to reverse course on the ad tax, one Council member said her office had cleared out 3,000 emails on the previous day.

What were arguments for/against the ad tax?

For an ad tax:
• The city should broaden its tax base
• A 3 percent tax rate was “measly;” it could have been higher
• Opponents’ claims about harms to business were overstated
• Taxing advertising helps pay for needed services
Against an ad tax:
• Bad timing (raising taxes during a pandemic)
• Ad taxes hurt commerce/business, especially small business
• With an ad tax, DC would be an anti-business outlier
• Ad taxes are difficult/burdensome to implement and enforce
• The actual tax rate would be more than 3 percent because of layered taxation on preparing, designing, selling, and placing advertising

In our industry, who should we thank?

Thank the employees of out of home media companies in DC who contacted Council members, as well as their vendors, partners, and family members in the District.

What are take-aways from this ad-tax battle?

• Know the broader ad community, including local ad clubs that are part of AAF (American Advertising Federation)
• Know the local budget clock. The District of Columbia voted on fiscal matters in July for a budget that begins October 1.
Other budget cycles start January 1 or July 1.
• Know history. Since 1987, when Florida repealed its services tax that included advertising, 100 ad taxes have been rejected or repealed, according to Dan Jaffe of ANA (Association of National Advertisers).

The victory in DC, Jaffe said, “will help signal (to other jurisdictions) that a tax on advertising will be fought hard by a broad range of the business community.”