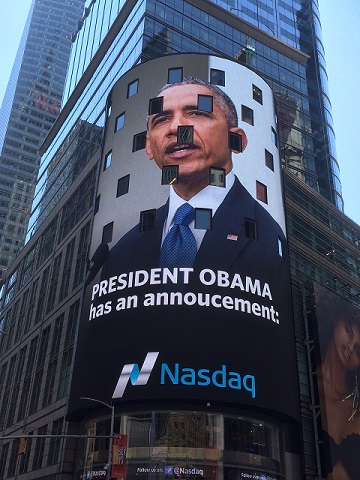 Peace Through Strength: Why Industry Political Involvement is Important

The election will produce a new Congress, with new leaders and new members on key committees.

Elections remind us of the last clause in the First Amendment — perhaps overshadowed by its protection of free speech – that protects the right to “petition the government for the redress of grievances.”

This right — to make our case to government — is vital to regulated industries.

What has been the result of our advocacy in Congress?  I submit that we, as an industry, have earned peace through strength.

Peace through strength was an ancient goal espoused by Roman Emperor Hadrian.  It’s also the title of a 1952 book written by an FDR advisor and the premise of President Reagan’s foreign policy.

Over the years, the OOH industry has never lost a roll call vote in Congress; the most recent occurred in the US House in 2015.  The last seminal, showdown “billboard vote” in Congress was in 1991.  We won, 60-39.

Since then, we’ve achieved peace through strength.

Stability in Congress has helped produce value for investors, confidence among lenders, and enhanced service to advertisers and communities.

For the OOH industry, that showdown vote a quarter-century ago was the most important congressional action other than enactment of the Highway Beautification Act (HBA) in 1965.

That legislation would have choked the industry by:

Victory in the Senate a quarter-century ago taught us lessons, un-dimmed by time, which are relevant today.

First, we are stronger together.

Unity begets strength, and the reverse is true.

Virtually every corner of the industry entered the battlefield before that 1991 showdown vote.  In Indiana, Dean White of Whiteco reached out to home-state senators, both of whom supported the industry.  The entire industry – Hoosiers and non-Hoosiers — benefited from people like Dean White.

Likewise, Barry Ackerley of The Ackerley Group checked in with a senator from Wisconsin, who voted with us.  Ackerley and the senator owned NBA teams.

Our side was led by a freshman senator from Nevada, Harry Reid, who blasted the anti-billboard proposal “an overt attempt to trash the Constitution under the guise of environmentalism.”

Lesson No. 2: Stand by your friends.

Twenty-five years later, Senator Reid is still our friend, referring to himself as the “King of Billboards.”

After the 2016 election, Reid’s leadership role in the Senate will be filled by Senator Chuck Schumer of New York, who views advertising as a hometown industry producing good jobs.

Lesson No. 3: Have friends in both parties.

Sixty votes in the 100-member Senate is a powerful threshold, enough to close off debate. (“cloture”). Bipartisanship is a building block to get to 60.

We have resisted the temptation to ignore one party or focus only on the party in power.  Since 1991, party control of the Senate has flipped back and forth, and it could change again after the upcoming election.

The Peace part of peace through strength.

What does it mean for us, to have relative peace in Congress for a generation?

Winning with 60 votes in the Senate in 1991 helped to lessen interest in further attempts to ban billboards.

Overall, our industry is more respected, appreciated, and valued.  More often than not, we are viewed as partners solving problems, not the problem.

The National Center for Missing & Exploited Children, an arm of the Justice Department, asked to be our partner to transmit AMBER Alerts (a formal agreement was signed in 2008).

This year, the White House asked to display the President’s image in Times Square to announce an historic addition to the National Park system.

“We are part of the conversation,” summed up Rick Robinson of the Billups agency when he saw the President’s image on the NASDAQ sign.

Twenty-five years ago, our friend Senator Milkulski said billboards are not an environment issue, like saving Chesapeake Bay.  Out of home formats deliver environmental messages, such as celebrating the centennial of the National Park Service (1916-2016).

Instead of constantly fighting for survival, peace through strength means we could grow, invest, and innovate.

By 1996, the Federal Highway Administration said change of billboard copy could be achieved by any technology.  The agency affirmed and updated this policy in 2007; government research released in 2013 said digital billboards are not distracting.

Nearly every state has taken steps to regulate digital billboards, and also to protect property rights by requiring government to pay just compensation when it removes billboards.

President Reagan pointed out that some mistakenly confuse peace with weakness or lack of focus.

We know that strength doesn’t come from nostalgia, resting on past success, laziness, or wishful thinking.  We still are a visible target with organized opposition that wants to hurt us in court and wherever laws are made.

To remain strong, we must be ready for battle, even war, like we fought 25 years ago.  If we engage, we must be committed to win.  That’s why we have peace through strength.