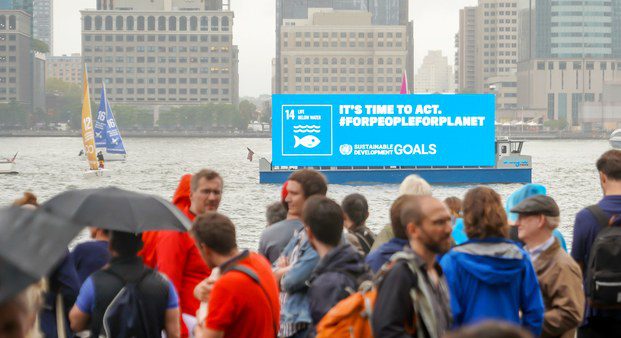 Greta Thunberg, the 16-year-old Swedish climate activist and Nobel Peace Prize nominee, sailed into New York Harbor August 28 and was met by a fleet of 17 sailboats representing each of the United Nation’s Sustainable Development Goals (SDGs) on their sails. Thunberg was arriving to participate in the Youth Climate Summit and the Climate Action Summit at the UN Headquarters today.

The flotilla, including a floating digital billboard, met Thunberg at the Verrazano Narrows Bridge and accompanied her to North Cove Harbor in Manhattan to show appreciation and solidarity for her mission to mobilize support for action to achieve Sustainable Development Goal 13, “Climate Action,” as well as the other 16 goals for a better world by 2030, adopted by world leaders at the UN in 2015.

Digital OOH inventory, throughout New York, including spectaculars in Times Square, this week is featuring PSAs to highlight the 17 goals.

On the other side of the Atlantic, many businesses in the UK closed offices last Friday to support the Global Climate Strike, also organized by Thurnberg leading into the Climate Action Summit. More than 100 independent and network agencies came together to support “Create and Strike”, including Publicis, Omnicom, IPG, Cheil and Accenture. The group urged the entire UK ad industry to support the cause and take time out of work to march.

Digital OOH space carried visuals created by the initiative at various locations across the UK.

Thurnberg’s homeland is addressing the diminishing bee populations crises with the help of McDonald’s OOH ads. New custom billboards in Sweden serve as “bee hotels,” where wild bees and other insects can make their nests. All McDonald’s franchisees have been given the opportunity to order their own bee hotel boards and customize the messaging.

Holland is also working to protect bees with OOH. The Dutch city of Utrecht is turning its bus shelters into bee sanctuaries. More than 300 bus shelters have been transformed into bee-friendly green hubs to support biodiversity in the city.

Grass and wildflowers have been planted on the roofs providing a safe haven for different types of bees that act as pollinators and help plants propagate.