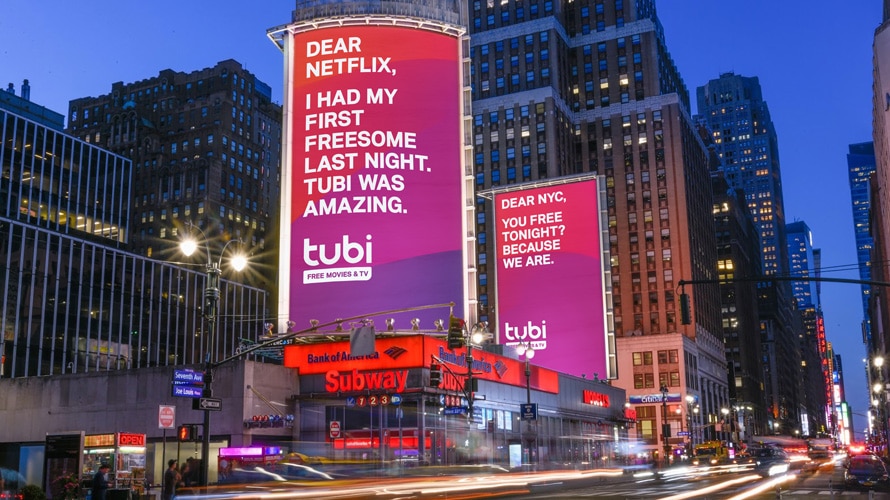 “Using mobile in conjunction with OOH is gold,” according to Sruti Dhulipala, senior strategist at global creative shop Stink Studios.

The “combination of scale and trustworthiness, especially at a time when digital channels are under increasing scrutiny for their lack of transparency and data misuse, makes OOH a hugely powerful tool,” she told Glossy.co.

Dhulipala knows this from experience, working with start-ups and online brands to increase awareness and amplify marketing efforts with OOH.

Here are some recent real-world examples of online services advertising in the real world:

The team first used social media to test and learn what kind of marketing and messaging resonates with customers. From there came a big push into OOH.

To date, the company has sold out of its inventory 10 times and amassed waitlists of more than 10,000 shoppers for some of its styles. Andie has raised over $5 million in funding and saw conversion jump 90 percent in the first half of 2019, versus the same time last year. The brand credits its OOH campaign with boosted awareness and sales.

Free streaming service Tubi is using OOH to let Neflix and Hulu users know there is a free alternative. The creative and strategy, which positions Tubi as a complement to other streaming apps, is featured on billboards, taxi TVs, and digital OOH inventory, as well as digital and social media. Learn more in Adweek.

If you want to reach New York City thought leaders, the subway is a great way to reach them, Joel Goldstein, the company’s creative marketing lead, told The Wall Street Journal. “There’s a big trend, the last few years, of startups advertising in the New York City subway,” he said.

In the last two years, more than 200 such businesses started advertising in the New York Subway system, according to the Metropolitan Transportation Authority.