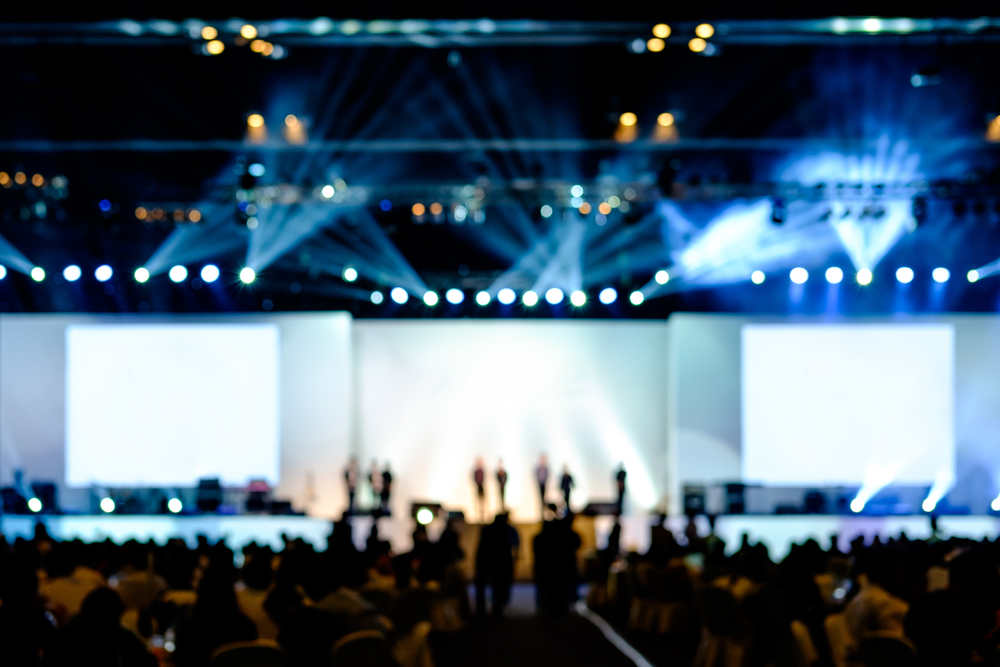 Last week’s Advertising Week was nothing short of “remarkable,” in true New York City style. With hundreds of panels and networking events to choose from, it was hard for any advertising professional not to participate in the outstanding content offered this year. Throughout the event, OOH was well represented with panels covering everything from digital and programmatic, to storytelling and more. There was also excellent attendance from a wide variety of ad professionals at the OAAA panel featuring this year’s industry campaign, Photo Ark #SaveTogether.

Here’s a recap of OAAA’s journey through each OOH panel presented this year: 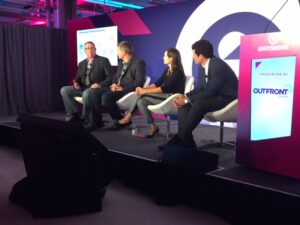 The panel for this hot topic predicted that these vehicles will begin to roll out more heavily in 2020 or 2021, beginning with robotaxis. It will then take around 11 years before these types of vehicles become available for purchase by consumers. Autonomous vehicles will evolve on five different levels, with level four including fully self-driving vehicles and level-five vehicles will not have a steering wheel.

The relation to OOH is clear. The core of these vehicles is centered in data, specifically location data. OOH is location driven, and already offering innovative location-based technologies such as geofencing. Geofencing can determine if someone inside a vehicle was exposed to an ad and later visited a brick-and-mortar location. This technology allows OOH to pivot from a one-to-many ad channel to targeting audiences with a one-to-one strategy, creating more personalized advertising.

The first few levels of autonomous-vehicle rollout will be a great opportunity for traditional billboards alongside roadways, as drivers are less focused on the road and will have more time to take in their surroundings. As levels four and five arrive, it is predicted more cars will have screens inside, creating another great opportunity for OOH to link with these screens. 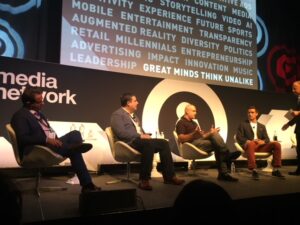 OOH had a key panel role in this mix of CMOs from tech companies including Twitter, Condé Nast, Facebook, and Oath. The panel discussed the culture of rapid change in the digital age. Whether it be OOH, radio, television, or any other traditional medium, the CMOs discussed the importance of enabling media with disruptive technology. Dan Levi, Clear Channel Outdoor, represented the OOH industry and discussed using mobile data to bridge the gap between OOH and mobile.

Levi stressed the importance of continuing education for veteran OOH staff, while at the same time populating the ranks with new talent well-versed on new technological opportunities. He used as an example the wide-ranging restructure of his company. Clear Channel Outdoor was previously structured with 30 independent markets in seven regions where he was responsible for introducing new technologies. A structural change led to seven new digital professionals who work with the employees daily to ensure ongoing education and development.

A key panel focus was the importance of creating an environment that celebrates discomfort and explores new technologies in the digital age. 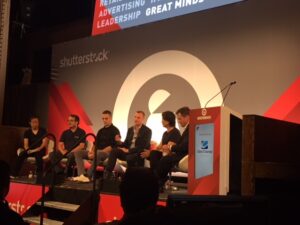 Where Storytelling Meets Selling in a Mobile First World
Panel:

This panel, led by Andy Stevens of Clear Channel Outdoor, highlighted the importance of data to the OOH industry and how it’s transformed traditional media in the digital age. Stevens shared how OOH had evolved from primarily a location-based channel to now, with mobile data, one that is more audience focused. The granularity of mobile audience insights allows the targeting of a specific viewer with OOH inventory. He also stressed other benefits of OOH, such as how OOH cannot be blocked, and its disruptive strength via great creative and appropriate targeting.

The panel concluded with a discussion of screens, agreeing they would become even more ubiquitous with the blurring of lines between physical screens and augmented reality. 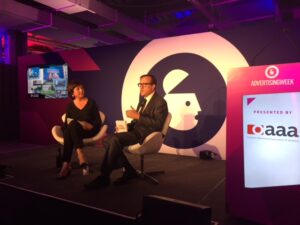 Photo Ark is the life’s mission of photographer Joel Sartore, whose goal is to document all species in captivity. The #SaveTogether campaign, which was the focus of the OOH initiative, featured animals at risk. The campaign launched in Times Square in May and has since been featured in cities across the nation. The OOH industry donated more than 72,000 locations on digital bulletins, printed bulletins, bus shelters, transit, mall kiosks, digital place-based screen networks, and more. Sartore’s work continues, and he hopes to have captured all 12,000 animals that make up the Ark in the next five to seven years.

The campaign generated impressive results:
– over 81 million people interacted with the campaign through all social channels
– the OOH industry donated over $45 million in media space
– the OOH campaign created more than 3.5 billion OOH media impressions
– the hashtag received 2.9 million impressions

Carracci thanked the industry for its generous contribution and mentioned that Sartore was thrilled to see his passion on display across the nation, mentioning the campaign had a tremendous impact on Photo Ark’s momentum.

This panel discussed the decline of in-home advertising and the resulting benefits accruing to OOH advertising, in addition to advanced technological capabilities for the medium, which have positioned OOH for continued growth.

The digital transformation across the OOH landscape offers opportunities with programmatic, data, and much more. The number one topic discussed during the session was the importance of tracking consumers’ life patterns. This allows for the creation of relevant content to trigger individualized reactions because consumer find the information useful. With ad serving, brands utilizing OOH will see greater attribution, lift, and KPIs, proving that programmatic influences consumers to visit brick and mortar location. The panel shared the average viewer is three to four times more likely to visit a business if they have been served a targeted advertisement versus those not exposed to the ad.

The panel concluded discussing visual detection technologies and other innovations that will continue to drive DOOH and programmatic growth. 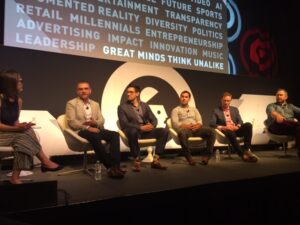 Programmatic is a data-rich ecosystem to connect people and screens, and this session explored how programmatic brings the most relevant content to consumers. Wade Rifkin, Clear Channel Outdoor, shared unique insights on behalf of the OOH community.

The panel took head-on the issues of transparency, brand safety, and trust, highlighting that DOOH does not experience ad blocking or fraud. Programmatic offers an array of data and analytics to help target messaging, creating an opportunity for the industry to be the most contextually relevant ad medium. By pairing DOOH and mobile, consumers can experience unified messaging across channels, ultimately driving sales.

The panel ended with discussing the strong competitive position OOH holds with new technologies to reach consumers in ways never before expected. With access to data, OOH advertisers can choose the right placement to reach their target audience every time. 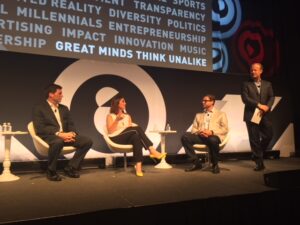 This panel took the location-data discussion and applied it to place-based DOOH formats in taxis, elevators, and LinkNYC WiFi network kiosks. The group again stressed the importance of access to location data to provide real-time and targeted messaging.

Marta Martinez, Intersection, shared recent campaigns that used location data to create relevancy. MillerCoors gave real-time updates on train arrival times for the subway system in New York City. When a train was delayed, the company fed targeted messaging to DOOH locations nearby encouraging commuters to come grab a beer while they waited. In a separate example, Intersection utilized its Link NYC WiFi network kiosks, in partnership with Shazam, and identified the most popular music in each neighborhood of the city, ultimately curating playlists available to download via Shazam when visiting that area.

The panel unanimously agreed on the importance of ensuring consumers are receiving information that they find valuable and relevant to the physical environment, and the ongoing promise DOOH holds for the future. 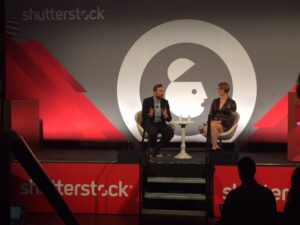 In this final OOH session of the week, the focus was the evolution of technology and how advertising will transform in the future to meet the needs of citizens in smart cities. By connecting mobile and online with OOH, brands have the opportunity to immerse consumers with their ads by making them interactive and responsive.

Dave Etherington, Intersection, gave insightful examples of native content mixed with digital to bring advertising to life, offering relevant and important messaging to consumers. One such example included how Spotify could sponsor a campaign spotlighting the musical history of New York and use digital displays to tell the story of different types of music specific to each neighborhood throughout the city, such as how hip hop was invented in the Bronx.

The panel also covered artificial intelligence and augmented reality. Etherington highlighted how OOH has begun to incorporate both augmented reality and artificial intelligence into campaigns with facial and voice recognition technologies. He closed sharing his dream of a future when OOH will be able to respond in real time to consumers, offering services such as buying sports tickets or asking for directions, ultimately making OOH perfectly relevant and a key part of smart technologies of the future.