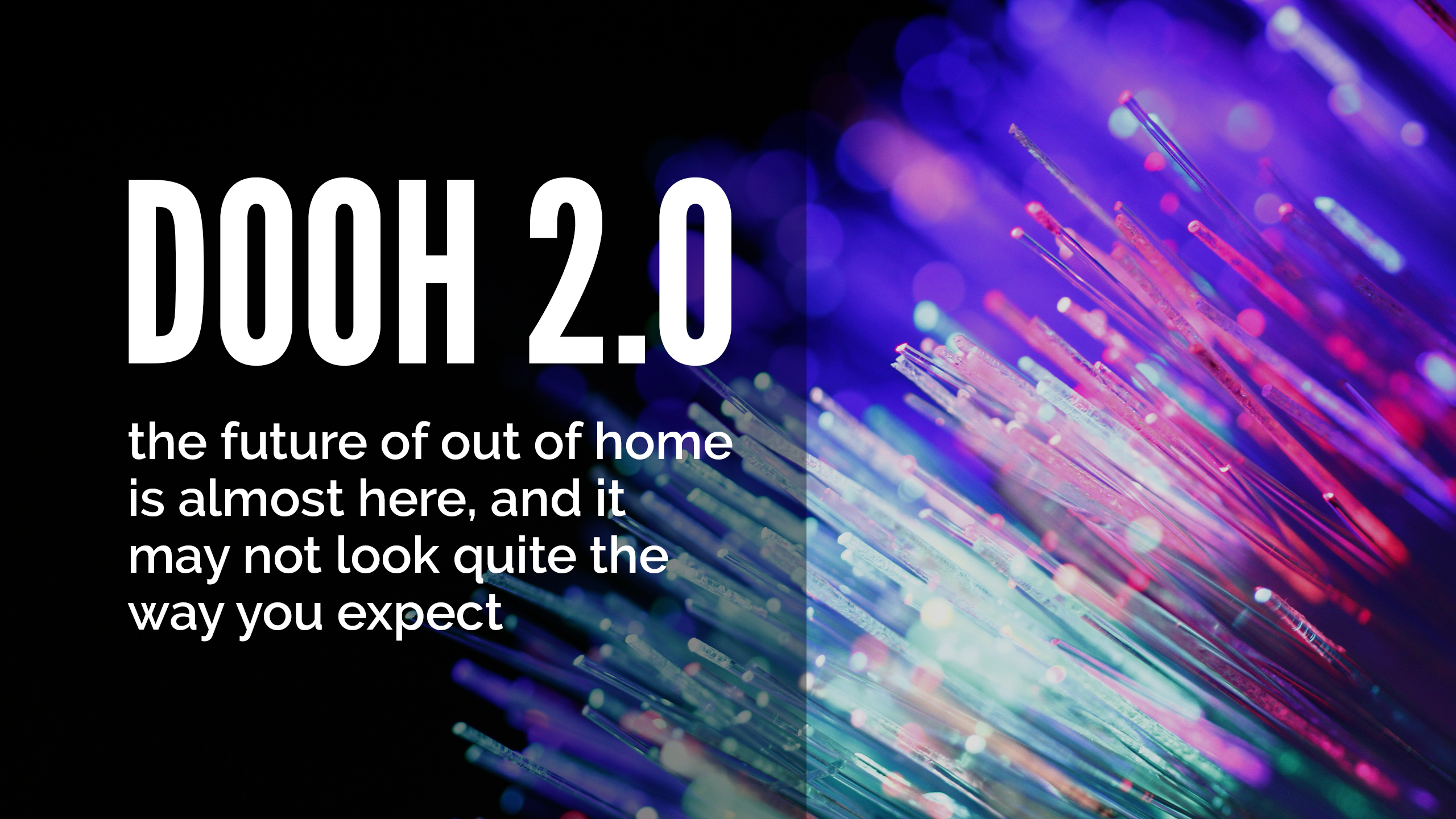 On July 1, 1941 before the broadcast of a baseball game between the Brooklyn Dodgers and the Philadelphia Phillies (Go Phils!) Bulova watches ran the first official, paid television advertisement in the U.S. (they paid between $4.00 and $9.00, reports vary), and advertising experienced a paradigm shift as screens became the most important media format.  In 1994 the new web magazine Hotwired ran what is generally regarded as the first “banner” ad for AT&T, and the screen landscape shifted.

A few years later mobile phones came along and took those ads from the desktop and put them in our hands. And now Digital Out of Home is about to change the ecosystem of advertising screens again. Digital Out of Home media is on the verge of a change that will ultimately reshape the Out of Home industry.  As the media moves toward a screen based environment tied to data & technology, criteria like time, content, and contextual relevance will be the new pillars of OOH media placement. The future of Out of Home is almost here, and the future is Digital.

Based on a recent study by the Advertising Association/Warc Expenditure Report, Digital Out of Home accounted for 31% share of total OOH spending in 2015 – it is expected to grow to 40% in 2017. Various models project growth rates from 9 – 15% over the next few years. That means that around 2020, digital Out of Home spending will likely account for more the 50% of OOH spending. 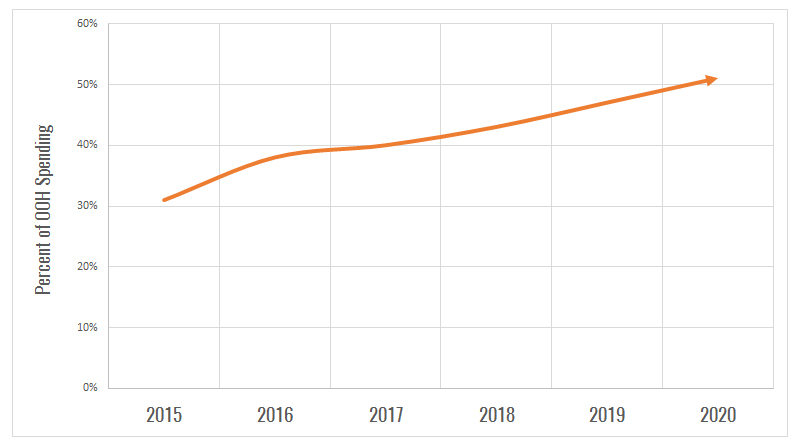 The declining cost of the hardware is certainly helping to drive this change, particularly for the profusion of place-based networks that are popping up. Media owners in major markets will work with city services to help tie their media into the local urban infrastructure, adding value for the city and consumers while creating new media spaces.

At the same time, media planners are also getting on board. Based on a survey by the DPAA (Digital Place Based Advertising Association) in 2015 just over 50% of media planners included DOOH in their plans. In 2016 that number shot to 61%.

We’ve already talked about “Big Data”, but in the fairly near future we will see that transform into “Live Data” as the speed of that pipeline increases. Data from our mobile devices, along with smart watches, wearables, and other connected technology will feed location & behavioral segmentation directly into media planning and buying platforms.

For Digital Out of Home the ability to ingest, and respond to this real time mobile location data, coupled with the growth in machine learning will change the way the media is targeted and deployed. Media plans will be created based on predictive algorithms drawn from mobile audience segments that show the likelihood of your audience being in proximity to the display. Then, the deployment of the media can be fine-tuned based on real time data based on current audience levels.

Proximity and context also speak directly to DOOH’s growing alignment with mobile.  The geofencing of Out of Home displays can provide mobile with the context to deliver highly targeted ads, while in return mobile provides OOH with audience location data and attribution. The data feedback loop creating this symbiotic relationship will only make both media channels more targeted, more powerful and more measurable. Digital Out of Home will completely reshape the way we think about creating OOH media plans.

Streaming data will also allow DOOH to be re-targeted in the same way that mobile and online are now.  When a consumer in the target audience is exposed to the ad on a digital subway platform, the ad will be re-targeted to reach them on a digital transit shelter as they walk down the street 20 mins later, or a digital screen in their favorite coffee shop. 78% of media planners said they would be “more likely to recommend DPB/DOOH in the future if mobile were used to retarget ads that have been delivered on DPB/DOOH”. (DPAA)  The Battersea Dogs campaign (which used RFID tags as opposed to mobile) was a first pass at this type of campaign, and was immediately recognized as a glimpse of the future.

These changes will also help to enable cross platform re-targeting as well, aligning OOH buys with other digital screens, and even other more traditional media. Just last month Australian health insurance provider AHM launched a campaign where digital billboard displays were deployed to align with the company’s radio spots. 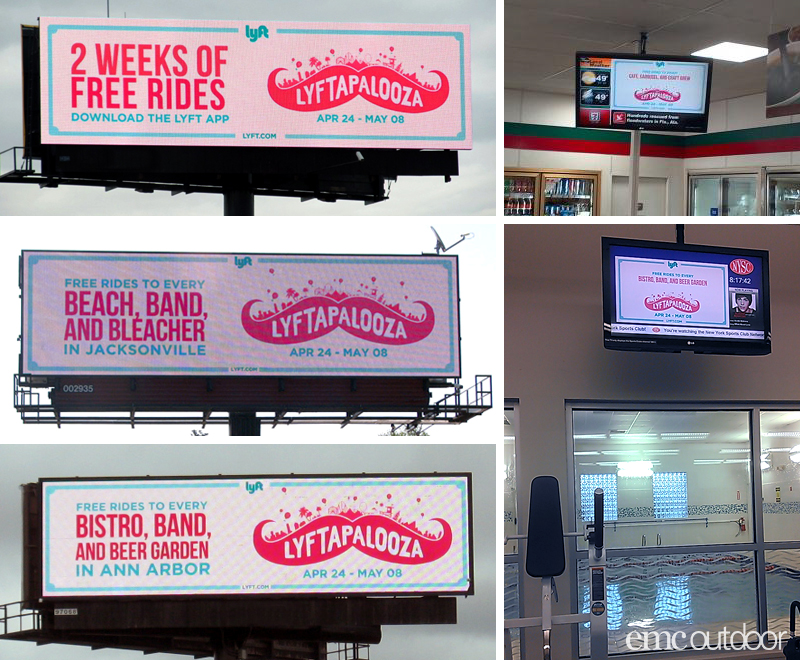 Digital Out of Home has been around long enough that most advertisers and agencies are comfortable with the concept of dayparting. In the next iteration of DOOH, customized and optimized content will be the default, and it will be delivered across multiple DOOH channels. Creative executions will be segmented to account not only for time of day, but also for other factors like location, environment, and dynamic consumer data. A library of creative executions will be stored on the advertising networks, and served up when the appropriate demographic and psychographic criteria are met.

It will also be tailored to the audience segment to be targeted at that specific time and place – serve up creative targeted at urban commuters on the subway, while suburban moms get a different digital creative served at their local fitness club. 62% of urban consumers would be interested in a Digital Out of Home advertisement that showed them information relevant to their specific location or time of day. (FEPE, “Always On” 2014)

One of the biggest changes the growth of digital will bring to the Out of Home industry is how the media is planned and bought. Speed and simplicity will be two crucial factors. Online interfaces will give media buyers the ability to plan based on audience behaviors, set up the delivery times and levels, upload the creatives, deploy the campaign all through one seamless interface.

Whether it’s a custom in-house media planning tool, a media network portal, or a 3rd party aggregation system, real-time buying across multiple networks will be a basic expectation for agencies and advertisers.  This means no more waiting around for spreadsheets, and sending proposals back and forth. The planning and buying cycle will become shorter, and more agile, allowing for rapid changes and response to current circumstances, consumer sentiment, etc.

There’s been plenty of buzz about the idea of programmatic buying in OOH, but whether it truly comes to fruition in the same way that online and mobile are purchased – with multiple advertisers bidding against each other for ad delivery – has yet to be seen.  The need for media owners to be able to optimize their limited space will certainly have an effect. Plus, the importance of using specific displays for advertisers with real world locations may keep the focus on more of a real time buying paradigm.  The likelihood is that we may see both models running in parallel for quite some time.

A new buying model means the currency of OOH must change as well. Historically Out of Home media has been bought in monthly cycles, based on specific locations which provided a certain DEC or OOH rating. As digital takes over the new currency of OOH will most likely become targeted impressions. Campaigns will be planned, and media bought based on desired targeted impression levels.

This new currency and buying system will have multiple benefits. It will allow for more accurate targeting, and ease of buying for the advertisers, but will also allow for more flexible pricing on the part of Digital Out of Home media owners. Unlike the “virtually” unlimited media space of online advertising, OOH is by its nature governed by the limiting factor of a finite number of physical spaces. That means if you want to reach a very precise audience at a highly desirable time, those impressions will come at a premium price. This will allow OOH media owners to avoid the “race to the bottom” of pricing that would commoditize every impression to its cheapest level.

The industry and media owners will need to work together to develop consistent standards and practices on how media is sold and delivered in this new paradigm. There is a considerable opportunity for media owners to transform the media from one that was treated as an afterthought, to one that is viewed as progressive, dynamic and easily integrated into other media plans.

Where are we headed?

While the increase in DOOH is certainly significant, and it will likely claim the lion’s share of OOH spending in the very near future, traditional static media will hang around, and stay relevant for some time. Practical factors like economics and audience size will mean that OOH in more rural areas will have a long wait before the big screens show up.

Ultimately the digital evolution will force us into a whole new way of thinking about OOH. It will become a media channel that is fueled by real-time buying, real-time creative optimization, contextual relevance to both the physical location and environment, as well as the current viewing audience. It will rely on interactivity with both humans, and their devices. Media will be bought based on targeted impressions as opposed to time/location, and it will be retargeted across multiple DOOH networks as well as mobile as it integrates with other digital media channels.

As the noted technologist and futurist Ray Kurzweil said; “Our intuition about the future is linear. But the reality of information technology is exponential, and that makes a profound difference. If I take 30 steps linearly, I get to 30. If I take 30 steps exponentially, I get to a billion.” Digital Out of Home has its walking shoes on and is ready to start making strides.

Originally posted to the emc outdoor/blog.