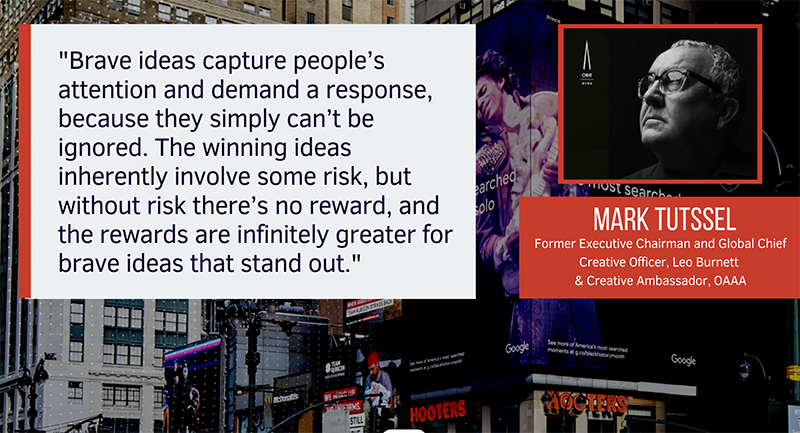 The oldest advertising medium in the world is rapidly becoming ever more powerful, potent and impactful. Especially now.

The global 2021 advertising awards season recently concluded and the most prestigious shows, Cannes Lions International Festival of Creativity, D&AD, the OBIE Awards and The One Show announced their winners.

These shows are a barometer of the health of our industry. They are about finding tomorrow’s ideas that reset the creative bar and move the industry forward.

Posters are the only true mass medium left. You can’t turn them over, block them, tune them out, switch them off and if they’re really good, you certainly can’t ignore them.

The awesome power of simplicity is the key to grabbing people by the eyeballs.

Here’s a selection of the winning Out of Home entries that caught the jurors’ eyes.

The juries were looking to discover the ideas that help brands move with culture. Breakthrough, daring, fearless ideas that reflect the culture and the people we are ultimately trying to inspire.

Brave ideas capture people’s attention and demand a response, because they simply can’t be ignored. The winning ideas inherently involve some risk, but without risk there’s no reward, and the rewards are infinitely greater for brave ideas that stand out.

Pandemic-related work did capture the juries’ hearts and minds at many of the major 2021 award shows.

A few innovative major brands asked the question, ‘What can we do to help?’

Dove evolved the definition of their long-running ‘Campaign for Real Beauty,’ showing that beauty isn’t how you look, but what you do.

‘Courage is Beautiful’ showcased powerful portraits of real frontline healthcare workers, wearing the physical and emotional toll of the pandemic on their faces. Striking images of their faces bruised by protective masks grabbed people by the eyeballs. This powerful outdoor campaign launched Unilever’s commitment to donate $5 million to frontline healthcare workers globally. Beautiful in its simplicity this OOH campaign included digital billboards that were strategically programmed and placed near hospitals worldwide. Their sacrifice and courage epitomized the true meaning of beauty and deserved to be honored.

The on-trade is one of Heineken’s biggest partners–bars, restaurants, hotels, cafés. But during the pandemic it was struggling like never before.

Heineken’s ‘Shutter Ads’ campaign from Italy was the epitome of a Covid-19 piece of creative thinking. The brand turned shutters of locked down bars into media space, paying bar owners to post Heineken ads on them. The brand shifted the way they program media buying, redirecting their existing media budget from outdoors to the shutters of 5,000+ of the most famous and loved bars worldwide.

This purpose-driven idea not only did good, it was commercially smart. Independent bars are important distributors for the brand, and helping them weather the pandemic emotionally connected bar owners with the brand. ‘Shutters’ raised awareness of the challenges faced by on-trade outlets, redistributing €7.5m to the bars involved. This was a savvy way to support independent bars and retailers and I’m sure this symbiotic relationship will pay dividends in the long run.

The juries were looking for fresh, original, transformative ideas. Ideas that displayed originality, lateral thinking and skill in execution.

Burger King utilised giant billboards to show the different stages of a Whopper decomposing over a 35-day period. ‘Moldy Whopper,’ a brave, powerful dramatization of the chain’s signature sandwich with no artificial preservatives, resonated with the juries. This visually bold idea grabs people by the eyeballs, stops them in their tracks and rewards them for their time and intelligence.

Another jury favourite was a cheeky outdoor campaign ‘Only Keep the Best of France’ and limited edition packaging for Le Chocolat des Francais. A natural and handcrafted chocolate bar, 100% made in France. This beautifully crafted campaign pays tribute to the life that everyone hopes to return to soon, with the good and bad times that makes France so charming. The brand collaborated with over 500 artists and released over 1,000 chocolate bars signed by the illustrators.

Great brands have an unmistakable brand identity. They capture the human spirit. They are delightfully simple. They move people to act. The Red Cross’s sole purpose is to prevent and ease human suffering in the face of any and all emergencies. When human crises occur and everyone runs away, the Red Cross runs towards the heart of the emergency. This eye-catching ‘Run. For. Life’ campaign demonstrates, powerfully and simply, the impact the Red Cross’s aid has on people around the world.

You can’t ignore brilliant out of home. There’s a beauty and power in posters that other platforms cannot offer. Another wonderful example is this year’s OBIE Awards top honor, the Platinum award, for the groundbreaking Google Brand Studios ‘The Most Searched’ campaign. 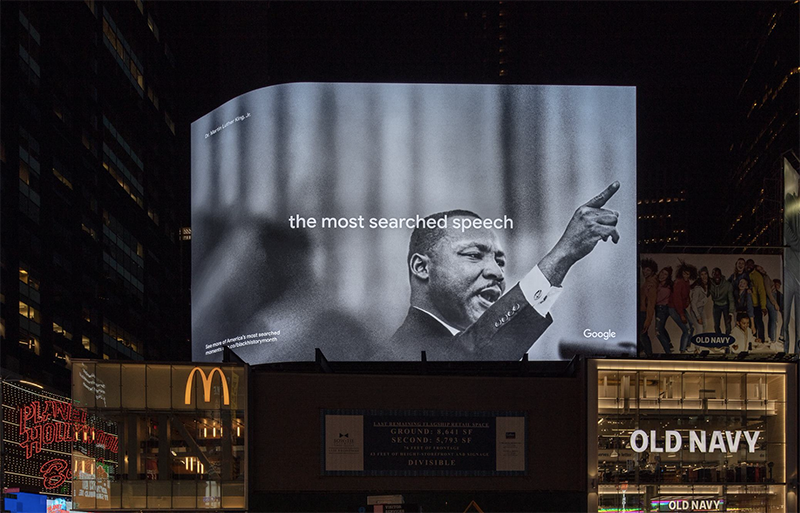 This Black History Month, Google honoured the icons and moments that have been searched more than any others in the United States with a celebration of ‘Black History Makers.’

Posters need more ingenuity than any other medium to convert roadside & street wallpaper into powerful communication. This campaign is a prime example.

People in this industry find themselves in an exhilarating new universe which presents us with an infinite canvass and a world of limitless creative opportunities. Successful brands and clients of the future require not only sensitivity and understanding, but also a greater degree of bravery and creative intuition than ever before.

July, the month after Cannes, is the beginning of the 2022 awards calendar year. A year when the OBIEs will be celebrating its 80th anniversary. I’m looking forward to seeing fresh outdoor ideas that set a new benchmark in communication­­––dynamic outdoor ideas that capture the imagination and attention of the people, winning hearts and minds.