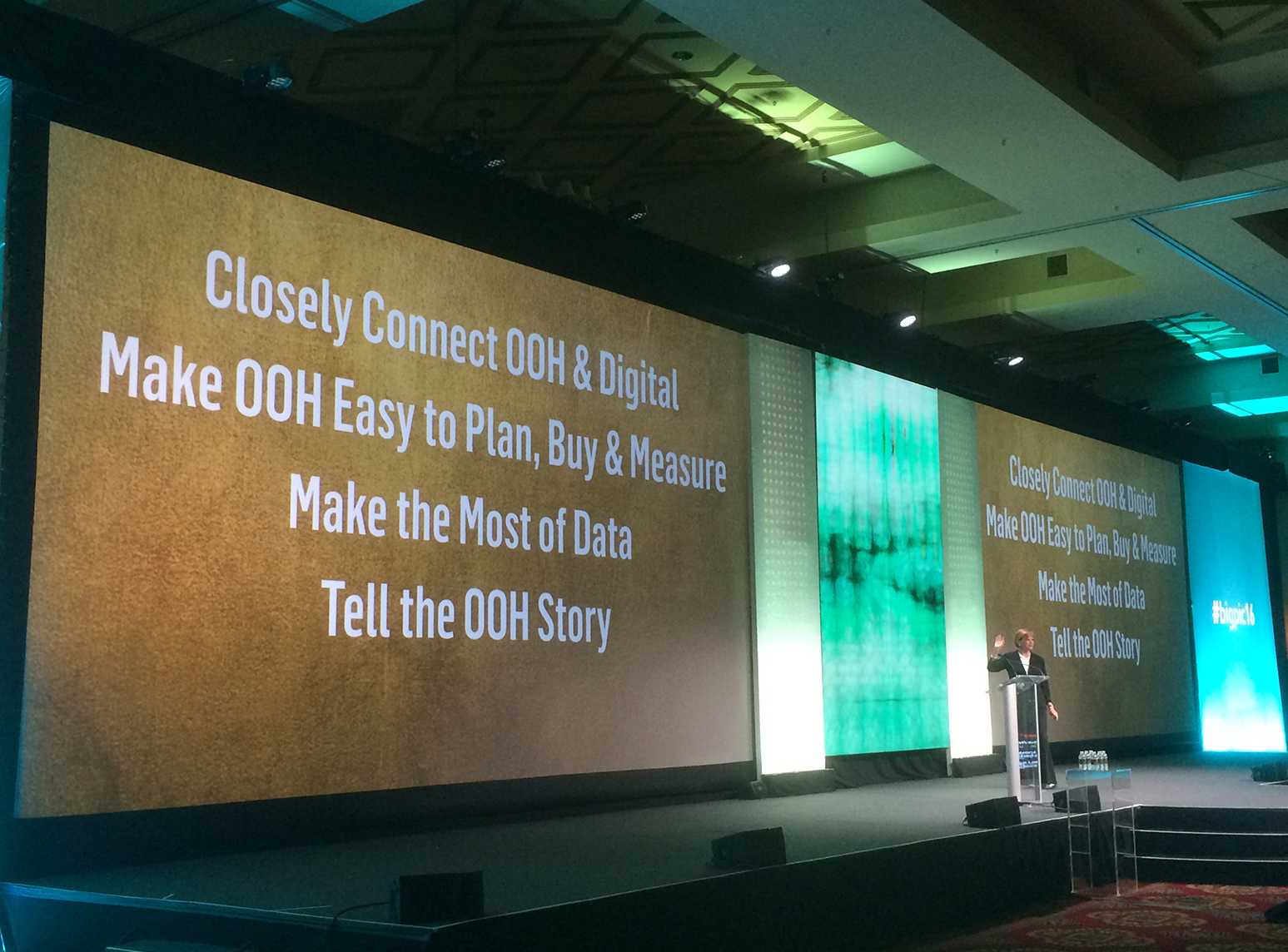 In the last year, OAAA’s marketing team worked to position OOH as a core media buy, sharing insights about the power of the medium with target audiences.

Five years ago, OAAA and its members developed a brand positioning platform that affirmed the compelling value OOH brings to advertisers. Last summer, an advisory committee was formed to update the original positioning work by creating a fresh OOH vision, brand, and positioning strategy for 2017-2021. Central to the positioning is how OOH advertising is creatively impactful, contextually relevant, and a media amplifier.

The work was supported with insights from 50 industry stakeholder interviews about OOH’s future. Additionally, nine advertisers and three agencies were interviewed, along with hundreds of OAAA members.

The new positioning recognizes that in today’s world of clicks, likes, and page views, OOH can’t be ignored, blocked, skipped, or viewed by bots. OOH surrounds and immerses consumers with real, powerful, advertising wherever they live, work, travel, shop, and play. That’s why OOH advertising should be a core component of more media plans.

As an extension to the project, the OAAA brand was updated with a refreshed logo and accompanying style enhancements. OAAA staff updated all printed and electronic materials with the new branding, including the association website and sales resource app.

OAAA worked with agency Partners+Napier and Project X to develop an OOH campaign that encouraged Americans to register to vote, as well as vote on Election Day, demonstrating how OOH drives digital engagement and behavior.

Campaign messaging drove people to a website that directed them to state voter registration details. Visitors were also able to customize identity labels and photographs with the label “voter,” which could be shared via personal social media channels.

A white paper will be released to explain the purpose and results of the campaign, which generated over 1 billion OOH impressions and 12 million online interactions. OAAA members donated more than $10 million dollars in OOH media, accounting for 3,000 OOH locations.

In partnership with Nielsen, OAAA released the Out of Home Study 2016, which offers a detailed examination of America’s travel habits and exposure to OOH ads. The study found more than 90 percent of US travelers have noticed some form of OOH advertising in the past month. The report also revealed OOH’s ability to capture the attention of young people and connect audiences of all ages with their smartphones.

“I enjoyed the webinar and thought the presentation of Nielsen data was clean, simple, and well developed.” – Richard Hughes, OUTFRONT Media

OAAA worked with Nielsen to conduct a comprehensive poster study. The study included a 10-market analysis – large, medium, and small in size – with 40 local and national advertisers, and 38 OOH campaigns. The intention of the study was to measure awareness, recall, engagement, and an ability for OOH to enhance brand perception. The study considered the value of posters as a standalone medium by spotlighting posters as an independent advertising platform.

After several months of intensive analysis and modeling, SQAD OOH planning rates were approved and will be released into the marketplace in Q1 2017. The initial release will be for the top 100 DMA and associated CBSA markets, with regular updates to follow. Cost per thousand (CPM) and cost per point (CCP) data will be available for audited OOH roadside formats by market with low, medium, and high valuations.

SQAD planning rates are used as inputs within many media optimization tools used by both advertisers and agencies and includes planning rates for TV, cable, radio, and online. OAAA formed an ad hoc committee to address the need for OOH return on investment (ROI) benchmarks and guidelines. As part of the effort, OAAA contracted with Benchmarketing, formerly BrandScience, to update a 2011 ROI study. The analysis looked at identifying a normal share for OOH within a typical media strategy, normative OOH benchmarks, and how OOH works to drive brand measures.

With the support of the industry foundation, OAAA contracted with Venable to study the impacts autonomous vehicles may have on OOH. A white paper was produced and distributed outlining emerging autonomous technology, implications for disruptive changes in society, policy issues, identified opportunities, and a business model for the OOH industry. An ad hoc committee was formed to follow developing trends related to autonomous vehicles.

More than 800 OOH professionals and customers attended the 2016 Geopath\OAAA OOH Media Conference & Expo in Boca Raton, FL. Themed The Big Picture, the conference explored how OOH fits into the larger media ecosystem and is breaking out of its silo.

OAAA presented to 76 planning groups at agencies across the country, in addition to 26 media company offices, and several OOH specialist groups. The OOH Road Show is intended to educate agencies on the strengths, advancements, and value of OOH advertising. The program focuses on the latest consumer research, outstanding creative campaigns, and a number of resources available through OAAA to assist agencies and advertisers in the planning, creation, and implementation of OOH buys. The meetings continue to produce excellent two-way communications with agencies often using the OAAA website as a resource.

Iconic brand Corona Extra was honored with the 2016 OBIE Hall of Fame Award, recognizing the brand’s consistent excellence in OOH advertising design over many decades.

“The OBIEs were once again a resounding success. You and your team bring so much class to our industry with events like this. Thank you for an unforgettable night.” – Tommy Teepell, Lamar Advertising Company

The 2016 OOH Media Plan Awards were presented on November 29 at the annual Advertising Club of New York’s OOH Day. Kinetic was honored with the 2016 OOH Media Plan of the Year award for its work on the General Mills Totino’s campaign, featured on multiple OOH formats in Denver, CO, to drive organic chatter about Totino’s and measure the amplification on social media.

The Ratings-Driven Media Planning Award, which recognizes innovative use of Geopath OOH Ratings, was presented to MacDonald Media and Merlino Media for their Sparkling ICE campaign. A total of five Gold Awards and four Silver Awards were presented.

In 2016, OAAA launched the Local Case Study Award program. Sixty-five entries were received in the inaugural year with the grand prize going to Clear Channel Outdoor – Indianapolis for the Hamilton County Visitor’s Association.

Serving Members and the Ad Community

“Your organization is fantastic. You are a fun group to work with.” – Jim Copacino, copacino+fujikado

In 2016, the marketing team serviced more than 500 research requests on a wide range of topics that included ad spend, industry category and company-specific reports, demographic analysis, advertiser and agency database information, and a variety of customized research reports.