Sales Tip: OOH Reaches Ten Times the Audience for the Cost of a Super Bowl Ad

With the NFL playoffs picture now decided, there’s building anticipation about Super Bowl LVI on February 13. Most advertising professionals know that the Super Bowl is the most expensive media platform available, and this year’s thirty-second spots are projected to hit a whopping $6.5 million. Here are a few relevant Super Bowl ad trends for advertisers to consider, as they analyze what they are getting for their money: 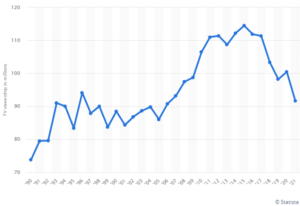 If you had a national advertising budget of $6.5 million, do you think you’d be more likely to bet it on a one-time thirty-second ad, or would you prefer continuous ad exposure in dozens of top US markets for four weeks?

To demonstrate the power of OOH in relation to the year’s most hyped media event, we examined how much exposure an advertiser could generate with $6.5 million in the OOH space. We began with a more traditional OOH campaign based on Geopath OOH ratings data, including both printed and digital OOH formats. The results are very impressive based on 600 TRPs (150 per week) over four weeks:

These are highly effective media campaigns!

And this comes at a period where OOH ad viewership and engagement are at record highs:

Furthermore, OOH has the highest recall among traditional advertising media:

While many OOH clients won’t purchase a Super Bowl ad this year, this research provides a powerful look at the capabilities of OOH in today’s media environment of fragmented audiences.

Advertising research firm Communicus has sought to answer a decades-old question: Is Super Bowl advertising really effective? The answer, for the vast majority of marketers, is a resounding “No.” Their most recent study, based on a nationally representative survey of 3,000 adults 18-65, revealed vital facts about the effectiveness of Super Bowl ads:

How many consumers do you know who have switched brand product allegiance to one because it appeared in a Super Bowl ad?

Ultimately, creating an effective ad that is both memorable and profitable will always be more of an art than a science. But what does seem certain is that in today’s world a viral, beloved Super Bowl commercial may not actually be an effective one, while OOH offers a highly effective alternative with ongoing local market presence and impact.