An important research analysis released at last month’s OOH Media Conference underscores the value of OOH in media plans, especially for retailers. In much the same way mobile and digital technology have fueled the continued growth of OOH media, mobile data is demonstrating the medium’s ability to deliver results. Using GPS data emitted from mobile phones and geofenced OOH media locations, advertisers can now show the incremental lift in key performance indicators (KPIs) for consumers exposed to an OOH campaign. This process of assigning credit to the medium is referred to as attribution.

Attribution is determined by using a research partner’s panel of consumers who have agreed to have their physical movements tracked using a mobile app or similar mobile technology. Consumer location data is collected using GPS, Wi-Fi, and beacon signals in proximity to geofenced OOH units and other points of interest. Incremental lift is calculated by comparing KPI differences between a control group who were unexposed to the relevant OOH campaign media and a group who was exposed to the advertising. Both groups are comprised of consumers who matched campaign targeting criteria.

Professor Rick Wilson, PhD, of Texas State University analyzed a total of 45 OOH attribution case studies submitted from a variety of OAAA members. The individual results from these cases were produced by independent third-party location measurement firms. Professor Wilson found OOH provided a positive incremental lift across the key performance indicators reported in the case studies. While the OOH formats in the case studies were predominantly billboards, they also included street furniture and transit. 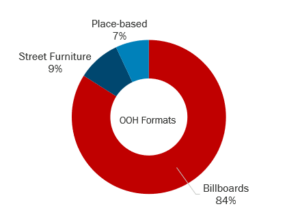 The four KPIs examined in the analysis included: 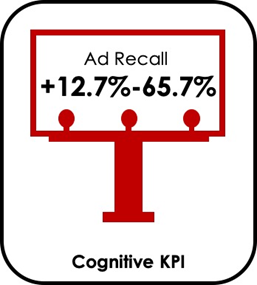 The average incremental lift in ad recall ranged from 12.7% to 65.7% for those consumers exposed to the OOH media portion of the campaign as compared to those who were not exposed. For some perspective, three of the five campaigns reporting ad recall took place in the Top 25 markets. Three campaigns also used multiple OOH formats, and digital boards were consistently one of those formats. 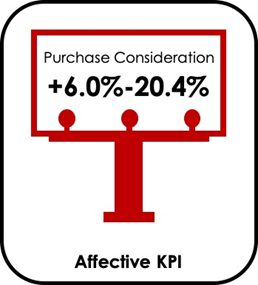 Purchase consideration indicates consumer interest in a brand, along with other brands in the category, but a situation where the consumer has not yet decided on the brand to purchase. The average Incremental lift in purchase consideration ranged from 6.0% to 20.4% across the five cases reporting this outcome measure. Four of the five campaigns in this category used only one OOH format, which was predominantly digital billboards. Three of the five campaigns had a mobile component. 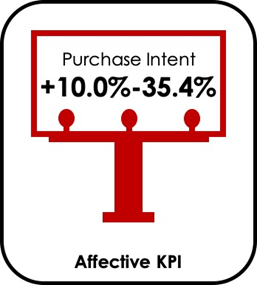 Purchase intent implies consumer interest in purchasing a brand, but a situation where a purchase has not yet taken place. Nine cases reported purchase intent as a KPI, and the average incremental lift for OOH media ranged from 10.0% to 35.4%. The markets included in this group were a good mix of the Top 25 and 26+ market groups. Fifty percent of the campaigns used only one OOH media format, which was predominantly digital billboards. Nearly half of the campaigns were for consumer-packaged goods. Only two of the nine campaigns in this category had a mobile component. 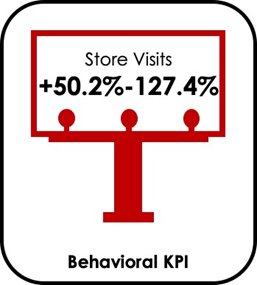 With 23 observations, store visits were the most reported KPI. Average incremental lift in store visits ranged from 50.2% to 127.4% for those consumers exposed to the OOH media portion of the campaign as compared to those who were not exposed. This KPI is well represented by 10 different industries. The average incremental lift for the top three reporting industries are 43.9% for automotive, 87.6% for QSR, and 86.3% for electronics. Nearly all campaigns with store visits as a KPI took place in the Top 25 markets. The average number of markets included in a campaign in this group was 3.3. The average number of OOH media formats used was 1.7 with both digital and printed billboards being used in 75% of these campaigns. One-third of the campaigns had a mobile component.